Our 62nd East Midlands Regional AGM was held on 26th October at Brockington College, Leicester and hosted by the Liecs./Northants KFA.
The AGM meeting was chaired by Sue Bennet with an interactive presentation that moved the Agenda along with interesting visuals and pictures.

She was pleased to announce that at our National AGM, two East Midlands members were recognised for their contribution to the KFA. Kathie Lynch was named as Teacher of the Year and Barbara Green awarded Member of the Year and overall winner. Congratulations to them both (articles about Barbara and Kathie including their nominations are on this website)

Following the meeting, we had two lively sessions from Lynne Dowdican and Lisa Terry and after lunch a further session from Pat Heed.
Our demonstrations included several of the Championship entries – many of which were placed (see article about East Midland at Championships). For those who went to the Championships, It was a delight to see these items again and for those who could not attend, they had the pleasure of seeing them for the first time. The months of rehearsal and practice was evident in the quality of the performances, worthy of any west end show. We are truly fortunate in the East Midlands to have so many dedicated and talented performers.
In addition to the championship items, we had performances by teams from the North and the South of our Region. ‘Dotts’ team, choreographed by Jackie Stocchino utilised a whole range of apparatus to bring us the magic of the circus with music from The Greatest Showman. Kathie Lynch, with her team from the South of the Region, used the same film score for her item ‘This is Me’ 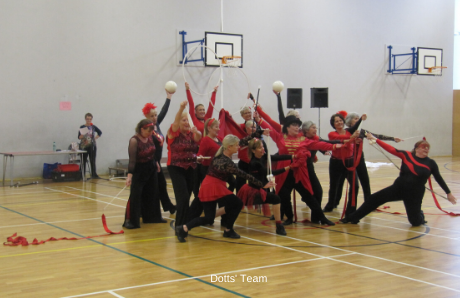 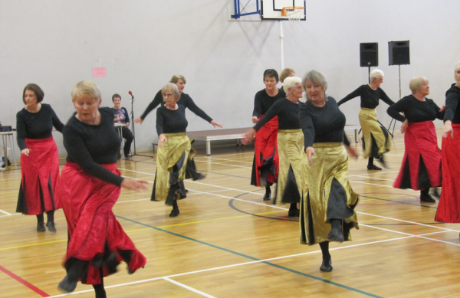 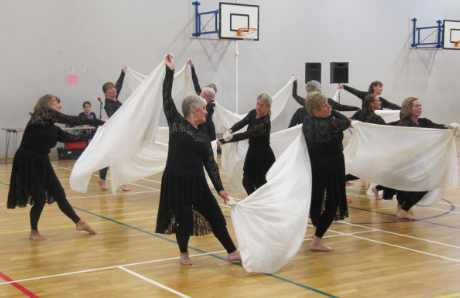 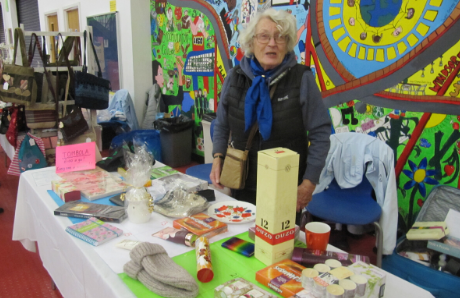