Our 2020 SWKFA AGM took place on Saturday 13th March at Woolwell Community Centre, Plymouth.  This is a popular venue often used by Plymouth area and we were lucky enough to have sole use for the day.

The day began with Cornwall teacher Judith May, taking the first of two sessions, who soon got everyone warmed up and enjoying her liveliness.  After a short break, Plymouth teacher Mary Cooke, changed the mood for the second session with a lovely lyrical movement.  Thank you to Judith and Mary for showing two very different styles of interpreting KFA/Laban.

The AGM proceeded smoothly with all SWKFA Committee Members standing for another year. 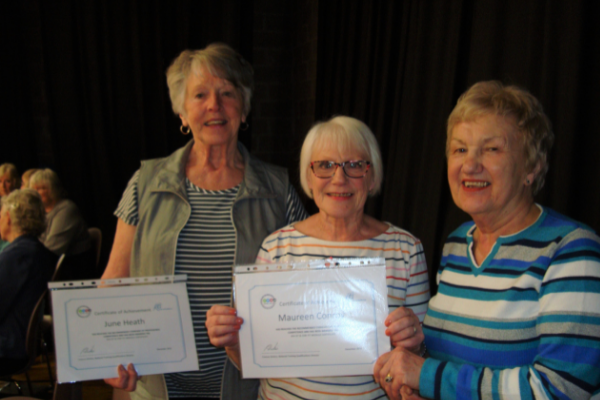 Presentations were made to June Heath and Maureen Conroy of their certificates of Achievement for Sit and Stay Modules. 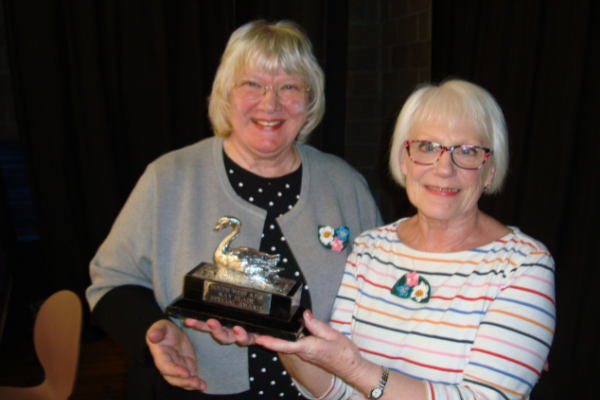 Annette Salter was presented with a certificate in recognition of 40 years teaching KFA classes and she was also presented with the Kay Slade Special Award ‘Swan Trophy’ for outstanding service to SWKFA.

There was a buzz of excitement as our special VIP Guest arrived.  Barbara Noble, SWKFA Chair and Pam Millett, Plymouth Area Chair, were very honoured to welcome the Deputy Lord Mayor of Plymouth, Terri Beer and her Consort, husband Colin Beer.

Once everyone was settled it was time to watch ‘Showtime’ as it is named here in SWKFA – the time when area teams demonstrate an item produced especially for the AGM by their teacher.  There were six such items from Avon, Cornwall, Plymouth, Somerset, South Devon and Wiltshire.  There was also a guest item from Plymouth Silver Swans.  As the City of Plymouth was holding events in 2020 to commemorate the 400th anniversary of the sailing of the Mayflower, Plymouth KFA performed an item dressed as pilgrims, which closed the show in fine style!

Writing this now and looking back the day was filled such fun and laughter.  It was as if we knew there was a difficult time ahead and wanted to make the most of spending time with friends and making happy memories, which is something KFA members are good at combining with their classes of exercise, movement and dance.