How good it was to see Janice Gronow from the Fitness League at Wallasey. It brought back many happy memories.

I first met Janice in the winter of 2011 when filming for a TV programme was taking place in Morecambe. ‘Turn Back Time – The Family’ followed the lives of three families from different social classes through various decades, and three adjacent terraced houses in Morecambe had been kitted out in the style of each era. When they were filming the 1960’s, word went round locally that the production team were looking for volunteers to take part in a ‘Women’s League of Health & Beauty’ class that two of the actresses would be attending, so I went along to the Church hall on a Thursday afternoon to bulk out the numbers. What a motley crew we were! Most of us were middle aged (or above!) from local Keep Fit classes with the odd exception of a star struck girl in her late teens/early twenties with a fake tan, false eyelashes, (& maybe other false parts!) lashings of make-up & no experience of Keep Fit. She was desperate to be on TV so we let her stand at the front! Janice had brought with her a pianist, along with two other Fitness League teachers who also joined the class.

We spent an hour or so practising the moves – ‘swing & stretch’ to the pianist’s rendition of ‘Daisy Daisy’ and other such tunes, bringing back memories of Eileen Fowler. Some of the exercises are now contra-indicated –do you remember ‘flat backs, straight legs, hand touching opposite foot’? The actresses were then brought in to join us for the filming. It was all over in a couple of takes, and the programme was on TV in spring 2012. I recorded it on video, and watched my 3 seconds of fame over & over again – if you blinked, you missed it! An Albert Hall performance it was not – the Grandchildren were not impressed!

Later in the year, I bumped into Janice & her fellow teachers again as we waited backstage at the National Festival, Milton Keynes, to rehearse the finale. The stage was so crowded there that we did literally bump into them. We recognised one another and spent time reminiscing about our TV appearance.

It is interesting to see how the Fitness League has moved with the times, as shown by Janice’s rally at Spotlight – no more flat backs! I must admit that I much prefer the creative choreography that is evident in our KFA work. Long may it last! 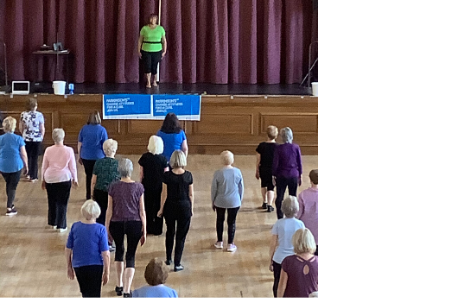